Got one in the current UK edition of Reader's Digest. 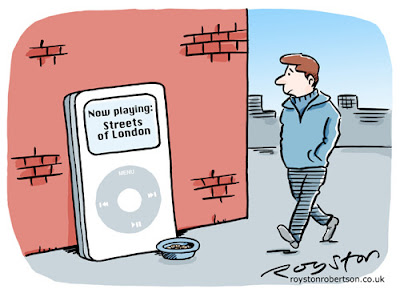 Sometimes the journey from sketchbook to publication can take quite a while. I first drew this as a rough (below) in July of last year. It stayed in my sketchbook for a while as I wasn't sure about it – probably because the iPod had "iBusk" on it, and musical notes were coming out of it. 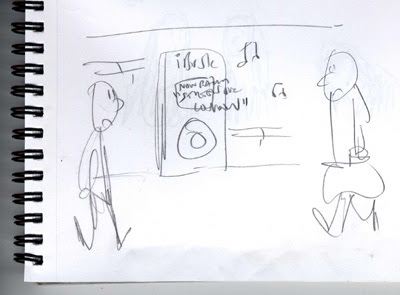 Eventually, I went back to it, and once I dumped that unnecessary stuff I could see it was a better gag. It was drawn up mid-September. But even then, for reasons that now completely escape me, I didn't think it was really a Reader's Digest gag, so it was sent to several other magazines first. Add to that the fact that the Digest works a few months in advance and turned out to be a bit of a trip for the poor young thing!
Labels: busking, cartooning, cartoonist, cartoons, gag cartoons, iPod, magazine cartoons, music, Royston, technology
Newer Post Older Post Home