Shrewsbury Cartoon Festival: Making an exhibition of myself

I'll be attending the Shrewsbury Cartoon Festival in a few weeks (April 20-22). I went along to the festival last year but was not an official participant. This year I am, which rather scarily means I have to draw a cartoon on an 8ft by 6ft board in the market square!

It also means I've got some cartoons in the "Mind Your Own Business" exhibition there, which opens at the Bear Steps Gallery on Tuesday (April 3). I submitted four pieces – two signed colour prints and two black and white originals. Three of the four cartoons have been previously published, but I thought I'd throw in a favourite of mine that has done the rounds of just about all the magazines I can think of but has not yet been published ... (I find that term so much more positive than "unpublished" or "rejected"!) 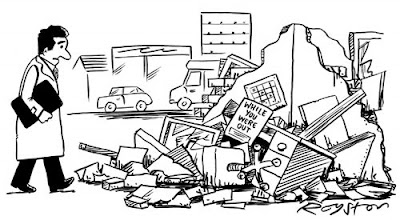