Sometimes a magazine will accept a cartoon but then hang on to it for a long time before using it. This one is in the current issue of The Oldie, but they've had it for almost a year. 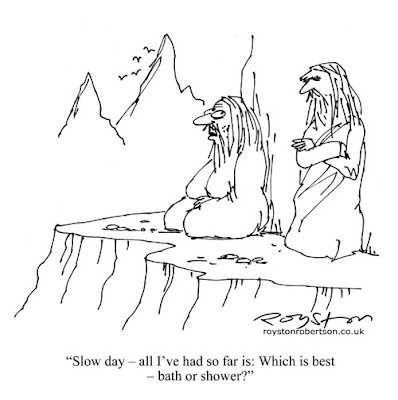 It was actually drawn in January 2006, with a Rotring technical pen. It's almost a year since I switched to brush pens, so although it's good to finally see this in print, I much prefer the brush-pen line.

The gag is, of course, a variation on the "wise guru" theme, one of the cartoon cliches that have been around for years, along with desert island gags and "take me to your leader" aliens. It's always a good idea to come up with new, fresh themes for cartoons, but it doesn't do any harm to knock out the odd variation on a well-worn theme!