Happy New Year, folks. 2007 is significant for me as it marks ten years in magazine cartooning. Obviously, like most cartoonists I've been drawing since I was a kid and cartooning has always been there, but it was at the beginning of 1997 that I made a new year's resolution to regularly submit gags to magazines such as Private Eye, Punch etc ... one of the few resolutions I've ever kept.

A few months into the year, I made my first sale to Maxim magazine (UK). It was about the rise of New Labour (well, kind of) who came to power in May. The Conservative Party's scare-tactic advertising slogan was, you may remember, "New Labour, new danger".

This appeared in the June 1997 issue of Maxim. The magazine has since dumped cartoons, to free up more space for naked women. 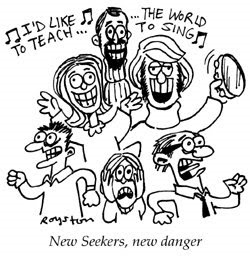 Of course, the cartoon looks pretty strange to me now, especially the character on the left. It was submitted as a photocopy of the drawing, so there's none of the touching-up in Photoshop that I would do now. Also, there was no Google Image Search then, so the New Seekers were drawn from memory! I just did an image search a moment ago, and there is not a beard to be seen. I think I may have confused them with Peter, Paul and Mary ...