A few cartoonists, myself included, seem to have managed to get iPod-based gags in Private Eye. It’s funny how these themes get picked up and flogged to death. Other examples of recent years include “I’m on the train”, “men behaving badly” and, of course, “does my bum look big in this”, all of which seemed to run and run. I suppose the appeal is that they usually just require a dodgy pun. Anyway, they also have a limited lifespan and I feel the bubble must surely be about to burst on the iPod joke. 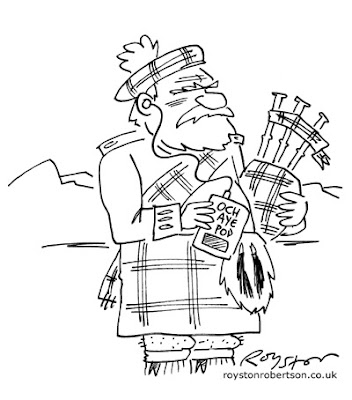 Hey look! Here's a picture of Rupert the Bear ... 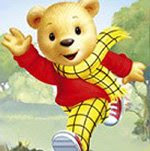 No, really. He’s looking pretty sprightly for 85 don’t you think? You may have seen this picture already in your daily paper. Traditionalists are, as they say, up in arms. Of course, traditionalists are always up in arms, but this time they certainly have a point.

This is how Rupert will appear on our TV screens next year, as remade by Entertainment Rights, who have bought the rights from Express Newspapers. He has had two fingers removed from his hands and all character liposuctioned from his face. Nice trainers though.

Apparently, favourite Rupert characters including Bill Badger will be kept, but – and this is the scary bit – some new characters will arrive in Nutwood. Be afraid, particularly if you remember when they brought back the Wombles with a few new “streetwise” characters or if, like me, you have young children and will probably be forced to watch it.
Labels: cartooning, cartoonist, cartoons, gag cartoons, iPod, magazine cartoons, Private Eye, Royston, Scottish, technology
Newer Post Older Post Home