A client asked me to draw a cute squirrel for a logo. "We want it to be very cute," he said. After the first rough he said, "make it more cute, more cute". So I pulled out all the stops. He had commissioned roughs from several cartoonists and in the end decided to go with another. So does that mean it was cuter than this? Or did I overdo it? It was probably for the best because the little rodent is rather nauseating.

Perhaps he was rejected because of the "T-shirt and no pants" look (the client's name was supposed to go on the shirt). It is widely believed that this sartorial choice led to Donald Duck being banned in Finland, but that is apparently an urban legend. 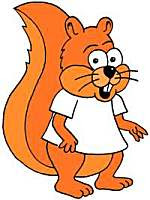