The pros and cons of "going viral"

Every now and then a published cartoon goes beyond the boundaries of the printed page and gets a lot of coverage online, as happened last week with this Private Eye gag.


I'm not sure exactly how many tweets/retweets you have to get for it to be classed as "going viral" but the phrase was used by The Poke. 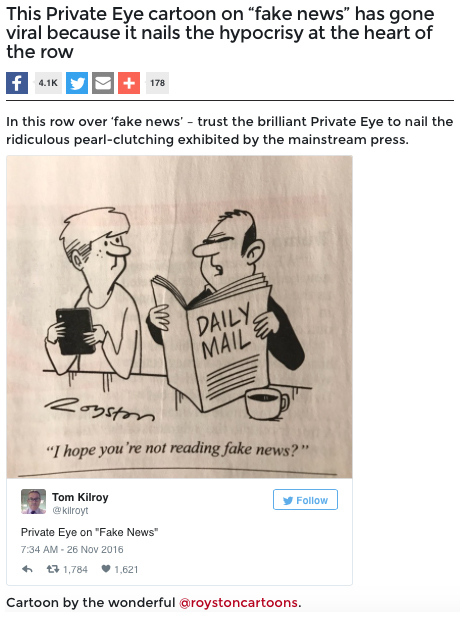 Of course, as all cartoonists know, you can die of exposure (a phrase often used when people offer little or zero money for a cartoon but claim "it'll be good exposure for you") and you don't see any extra financial benefits from a cartoon going viral.

It can increase followers quite a bit though, which can mean more work in the long term. However, that can only happen if you credit the cartoonist when sharing work online, and, if possible, include their Twitter name (or Facebook page, web link, whatever is appropriate).

The Poke post, above, did not do so originally but they redressed the balance when I asked them to in a tweet. Tom Kilroy who posted the version that got the most retweets did likewise.

I balk at approving of websites that make money from adverts using such shared cartoons as free clickbait content, but generally I try to see online sharing, by individuals at least, as a positive thing. 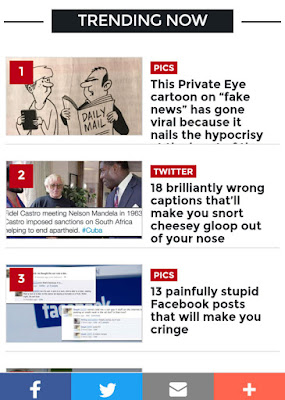 You don't get a lot of direct feedback as a freelance cartoonist, so when this does occur (other cartoons such as "Votey McVoteface" have been shared a lot online) it's nice to know that a cartoon has struck a chord. But please, don't forget to credit the cartoonist.
Labels: crediting cartoonists, Daily Mail, fake news, fake news cartoons, going viral, magazine cartoons, media, news, Private Eye, satirical cartoons, topical cartoons, viral cartoons
Newer Post Older Post Home