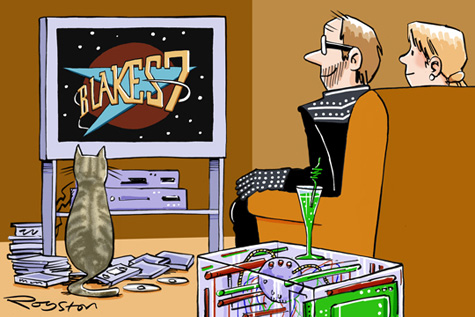 Having drawn the cartoons for the Adventures with the Wife in Space blog, in which the Doctor Who superfan Neil Perryman subjected his long-suffering wife Sue to every episode of the original series, I have now drawn one for its sequel.

Adventures with the Wife and Blake, will see the experiment repeated with every episode of the cult 1970s sci-fi show Blake's 7. It won't take anywhere near as long but it could still be grounds for divorce. The project is being launched using Kickstarter and fans can pledge to support it here.

Meanwhile, I've drawn the front and back covers for the Adventures with the Wife in Space book which is published by Faber & Faber in the autumn, to coincide with the 50th anniversary of Doctor Who. More on that nearer the time.