This was drawn for an article about a court replacing stenographers with a system where proceedings are digitally recorded and transcribed on computer later. 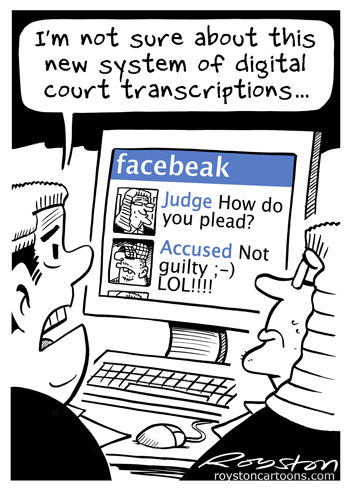 I liked the "Facebeak" joke, but I was concerned that some might not be familiar with the slang term "the beak" for a magistrate or judge (as in "up before the beak"). But I took a "you can't please all of the people" approach, and went with it.

The rush towards doing everything digitally does seem crazy. Just because we have the technology, does everything have to be digital? This move, inevitably, involved laying people off, and the paper couldn't find one person who thought it was a good idea, or that it would be a better way of doing things. It's "progress" for the sake of it. Add your "Luddite" and "old fart" comments below.
Labels: courts, Facebook, law cartoons, legal cartoons, newspaper cartoons, pocket cartoons, social networking
Newer Post Older Post Home