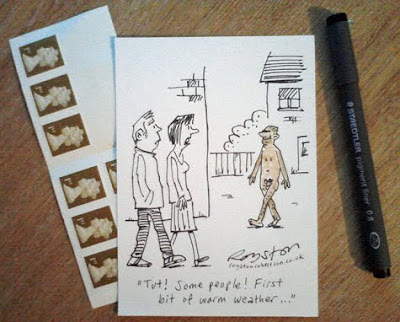 I drew a version of this recent Private Eye cartoon -- yes, now he's totally naked! -- on a postcard for an exhibition called Post Nude, to be held at the Horsebridge Arts and Community Centre, just up the road in Whitstable. 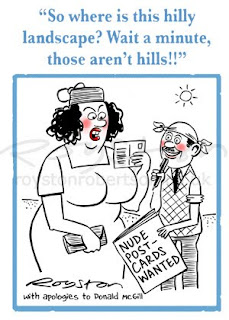 It's open to anyone and the idea is that you create on a postcard an original nude in any medium (photograph, pencil, paint, collage etc -- they didn't actually say cartoon ...) and send it in by post. Seemed like a crazy enough idea, so I decided to have a go.

I'm hoping mine makes it in time for the deadline. I was a bit late getting around to it, being very busy lately, but I actually knew about it weeks ago as a Whistable newspaper commissioned me to do a cartoon to go with an article about the launch of the Post Nude project. I put the two topics of postcards and nudes together and naturally came up with a tribute to the late, great, Donald McGill, right.
Labels: cartoon exhibitions, Horsebridge Arts and Community Centre, magazine cartoons, naked, nude, nudity, Post Nude, Private Eye, rude cartoons, springtime, summer, weather
Newer Post Older Post Home