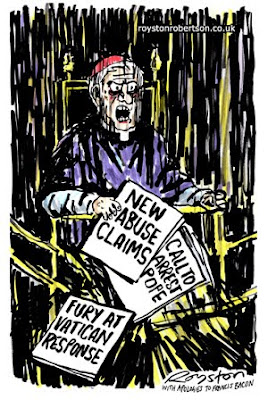 As Pope Benedict is due to visit Britain this week, here's a cartoon I did a while back about scandals in the Catholic Church.

This was drawn and coloured completely with brush pens in a futile attempt to recreate one of Francis Bacon's haunting "Screaming Pope" paintings (this one: Study after Velazquez's Portrait of Pope Innocent.)

I was brought up as a Catholic and was even an altar boy, though thankfully I never suffered any abuse (no inappropriate jokes, please!) But, as you can probably guess from the cartoon, I'm now officially in the "lapsed" category.