The Massive White Horse of the South 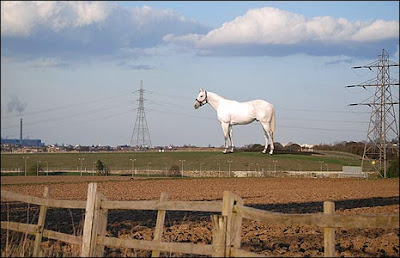 We're getting a new piece of public artwork here in Kent, it was announced yesterday. It has been "dubbed" the Angel of the South, apparently (though when the media says something has been dubbed it's usually them that do the dubbing).

It could more accurately be described as the Massive White Horse of the South, as it's going to be 50 metres high. Of course, the knives (chainsaws?) are out already, with people complaining that it is a white, er, elephant. It costs too much, they say, it won't stay white for long etc.

I was living in the North East when they were planning the Angel of the North. Many people voiced their opposition in much the same way ... costs too much, it won't stay looking like an Angel once the vandals have had a go at it, someone will strip it for scrap metal and so on.

We all know what happened. Everyone went, Ooooh, it's a great big statue! For us! They fell in love with it and took it to their hearts. I wouldn't rule out that happening here.

Public art gets a bad press from art critics. But it's not for them, it's for the people and quite often they embrace it. Look at the John Betjeman statue at the new St Pancras Station (if you can get near it). It it such a bad thing to produce art that people can really relate to? 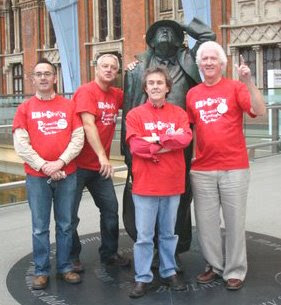 The Professional Cartoonists Organisation team gather by the John Betjeman statue at St Pancras Station after the Battle of the Cartoonists, part of the 2008 Big Draw. Left to right: Royston Robertson, Pete Dredge, Kipper Williams and Robert Duncan

Of course, the White Horse creator Mark Wallinger is famous for another animal-related artwork: the man in the bear suit wandering around a gallery. I'd like to have seen that 50 metres high, looming over the Kent countryside. 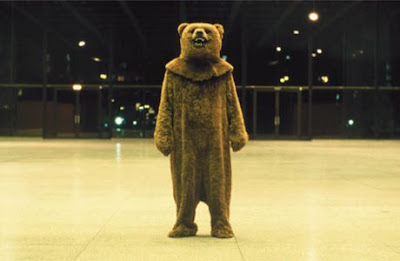 Here's an archive blog post on the last time there was a big art project down this way.